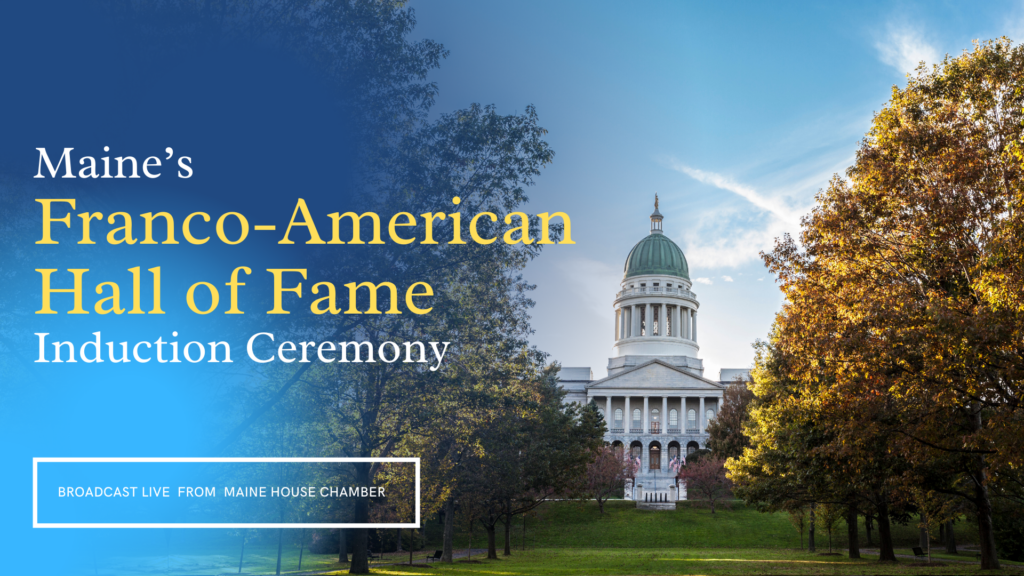 Twelve Mainers inducted into the Maine Franco-American Hall of Fame
The French Ambassador to the United States and Governor Janet T. Mills were among distinguished guests

AUGUSTA – In celebration of Maine’s Franco-American heritage, a ceremony commemorating Maine’s 2021 Franco-American Hall of Fame induction was held in the House Chamber of the State House in Augusta today. The Governor issued a proclamation recognizing today Franco-American Day in Maine.

Notably, the first Black Mainer was inducted into Maine’s Franco-American Hall of Fame, Alain Jean Claude Nahimana, founder of the Greater Portland Immigrant Welcome Center. Members of his family were present to receive the posthumous award.

The ceremony took place in French and English and featured musical performances in both languages. Sentiments were shared to induct nominees into the Franco-American Hall of Fame and remarks were made by distinguished guests including the French Ambassador to the United States, Phillippe Etienne as well as Governor Janet Mills. Speaker Ryan Fecteau of Biddeford presided over the bilingual ceremony in the Maine House of Representatives.

“French language and French culture have been a vital part of our state for more than 200 years,” said Governor Mills, “Throughout our history, Maine people of French heritage have served bravely in our armed forces and have been leaders in all aspects of Maine’s communities — from business, to education, to journalism, to hospitality, and politics. It was my honor to celebrate the many contributions of this year’s Franco-American Hall of Fame inductees, including my friends Representative John Martin and Senator Susan Deschambault, to our state. I wish them my heartfelt congratulations on this well-deserved recognition.”

“It was an honor to preside over today’s ceremony. My mémère, pépère, and my dad immigrated from Packington, Québec in the 1960s to work in Biddeford’s textile mills. Their immigration to Maine is the reason I am here,” said Speaker Fecteau. “Today, Maine recognizes the contributions of Franco-Americans who’ve made notable contributions to Maine; a suffragette who advocated for women to have a voice in politics, impactful teachers who’ve kept the French language alive in their communities and coaches who have touched many lives. We honor priests and veterans and archivists whose service to Maine has been integral to preserving Franco-American heritage. We honor public servants who have spent their lives making Maine a more just place for all. And we honor a visionary leader, originally from Burundi, who reminds us that welcoming immigrants is central to our shared values as Franco-Americans and part of what makes Maine a special place.”

“This celebration brings as much joy in its 17th year as it did when we first celebrated it,” said Rep. John Martin, D-Eagle Lake, one of the founders of Franco-American Day. “To see this day grow each year, and be marked by leaders from around the world, is truly special. To be inducted today is a true honor.”

“In the spirit of French being a living language in Maine, I’d like to congratulate and thank the educators in this year’s Hall of Fame in particular. For French to continue to have a presence in Maine, we need teachers and professors to educate young people and help them understand the value that French brings to Maine,” said Marc A. Jacques, Senior Foreign Policy and Diplomatic Service Officer and Consulate General of Canada to New England.

The ceremony took place in French and English and included music.  Sentiments were be shared to induct nominees into the Franco-American Hall of Fame and include remarks from distinguished guests:

The event was live-streamed on the Legislature’s House video feed starting at 10:00am.