A new profile of Maine Speaker of the House Ryan Fecteau in LGBTQ Nation, a national news magazine that reports on issues relevant to the lesbian, gay, bisexual, transgender, queer community, highlights both his groundbreaking new role as the first openly gay speaker in Maine and the incredible challenges that lie ahead in tackling the health and economic crises created by the pandemic.

Speaker Fecteau’s priorities include affordable housing, childcare, and creating opportunities for Maine’s workforce, and he describes his belief in compromise to enact solutions for Maine people, regardless of whether “it’s a Democratic solution or a Republican solution or an Independent solution.” 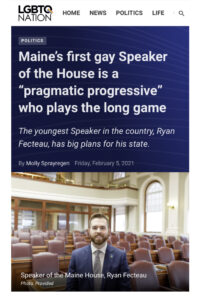 LGBTQ Nation: Maine’s first gay Speaker of the House is a “pragmatic progressive” who plays the long game