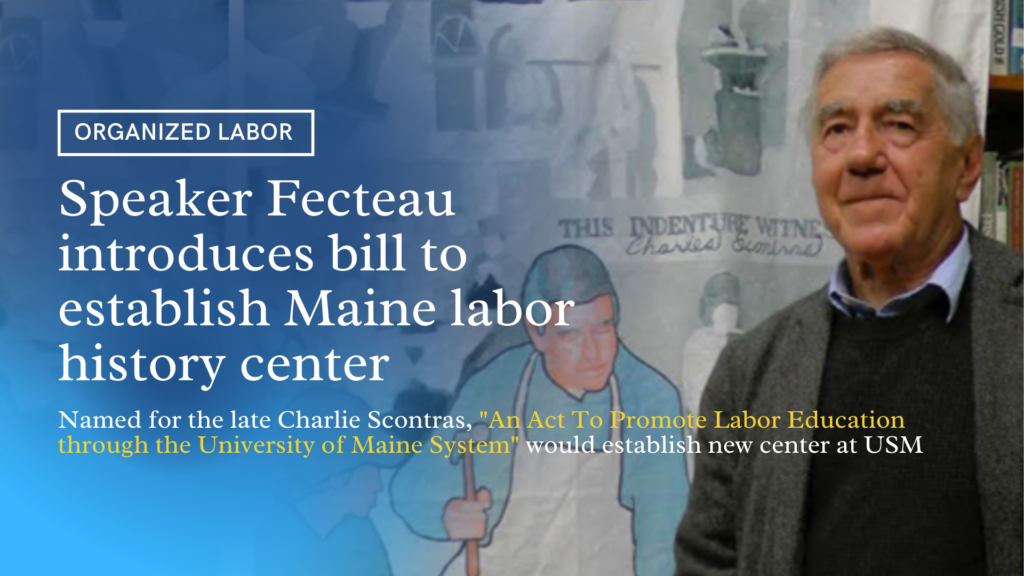 As labor organizing increases in Maine and nationwide, the UMaine System could establish a center named for Dr. Charles A. Scontras

AUGUSTA – On Wednesday, Speaker Ryan Fecteau of Biddeford will introduce legislation for Maine to establish a labor and community education center. “An Act To Promote Labor Education through the University of Maine System” is scheduled for a 9:30 a.m. public hearing before the Legislature’s Education and Cultural Affairs Committee.

From the Great Resignation and ‘Striketober,’ 2021 has been called the year of the worker. The year was marked by public demands for safe working conditions and fair pay, unionization efforts, and worker mobilization.

Through Fecteau’s bill, the University of Maine System would establish the Dr. Charles A. Scontras Labor Center at the University of Southern Maine to provide lifelong community-based labor education, research opportunities and outreach. The late labor historian Charlie Scontras was known for documenting the rich history of Maine’s workers. From the first strike of Maine fishermen in 1636 to the impact of deindustrialization on Maine’s economy, Scontras studied centuries of Maine labor history. The new center named for him would host workshops, symposia, trainings and opportunities for scholars and the public to conduct applied research on Maine’s labor history.

Scontras’ daughter, Dianna Scontras will testify alongside labor leaders, former students of Professor Scontras, and Mainers who have been impacted by labor organizing.

On Wednesday, January 12 starting at 9:30am, members of the press and public can stream the public hearing live on the Education and Cultural Affairs Committee’s YouTube Channel.