The bill, LD 1652 “An Act to Build a Child Care System by Recruiting and Retaining Maine’s Early Childhood Educators Workforce” is aimed at addressing Maine’s child care workforce crisis and putting the sector on a path to long-term growth and stability.

LD 1652 would enshrine an investment in Maine’s child care workforce into law, even after one-time federal dollars that were dedicated to supporting Maine’s early educators and child care providers through ARPA dollars expire in the fall of 2022.

“Maine’s child care workforce is at a tipping point. We want families to have access to affordable, high quality child care in every corner of the state. I see this as a critical piece of Maine’s economic health,” said Speaker Fecteau. “This bill aims to recruit and retain this critical workforce so Maine families have the stability and support they need to raise families in this great state.”

“We know that lack of quality affordable child care prevents people from taking jobs, from starting new businesses, from moving to rural communities, and it deprives kids of important developmental care. We’ve worked hard to train more child care workers and to pay them what they deserve, and we’ve built new child care facilities and created more child care slots to better serve Maine families, but we can do more,” said Governor Mills in a statement. “I support Speaker Fecteau’s proposal to raise the pay of child care workers in Maine, which is why I included funding to get it done in my supplemental budget. I applaud lawmakers for voting unanimously to move this legislation forward and I look forward to continuing to do everything we can for working families across our state.”

“Maine cannot wait any longer to begin treating and compensating child care workers as the first-rate professionals that they are. These are the people who make sure parents can go to work knowing that their kids will get the skills they need to show up to kindergarten ready to learn,” said Senate President Troy Jackson, D-Allagash. “I am really proud to cosponsor Speaker Fecteau’s legislation and am grateful to the Legislature’s IDEA Committee for their support.”

During the work session, Rep. Amanda Collamore, R- Pittsfield, who has a background in early childhood education, presented the amendment that was unanimously approved by the committee. “A lot of work has gone into this bill. For Maine, this is just as much a workforce development issue as trying to find people in the trades,” she said.

“We believe this bill is a good start to helping build and sustain workers in this critical employment sector. The Maine State Chamber of Commerce is fully at this table. I was a member of the working group that drafted Maine’s 10-year economic strategy and plan, which, for the first time, includes ‘building world class child care,” said Ben Gilman, Maine State Chamber of Commerce. “We thank Speaker Fecteau for putting this proposal forward and hope that it’s the beginning of addressing Maine’s child care challenges.”

“Making early care and education an attractive field now and in the future means fundamentally reshaping early childhood jobs, which then provides nurturing learning experiences for young children, support for working families, and infrastructure for a thriving economy,” said Tara Williams, Maine Association for the Education of Young Children. Williams, her mother, and her grandmother have all worked in child care in Maine.

“I originally wanted to go to school for early childhood education but when I found out I could get paid more being a teacher than a childcare provider I decided to change my major. In childcare, I can make minimum wage and my employer cannot offer more because families are already paying the max amount they can afford. If childcare wages are supplemented, it will make early childhood education a more viable career option for students like me, who have a passion for teaching our youngest and most vulnerable children,” said Whitney Gravel, who was a CTE student at Region Two in Houlton, now studying at EMCC.

“Over 50% of educators working in child care programs receive public assistance. This has the confounding consequence of making the cost of pursuing degrees and credentials that lead to better jobs and higher wages a barrier,” said Becky Smith, Maine Community College System. “This bill’s focus on wages, as well as credentials and degrees, is critical.”

“Preparing for the hearing on this bill, I found that in 2018 wages for Maine child care workers ranged from $11.55 an hour to $12.02 an hour, or about $25,000 a year on average. I wonder how hard it is to hire and retain good workers at these salary levels. And I think about that in comparison to the field I know well: law enforcement. In 2018 the average salary of a police officer in Maine, while less than the national average, was $49,840. They are worth every penny. Our child care workers should be just as valued.” said Joel A. Merry, Sagadahoc County Sheriff, a member of the national anti-crime organization Fight Crime: Invest In Kids.

“Struggling to find high quality educators to work in our program is not a new problem. It has been a problem since day one. But in the last year, we’ve lost incredible educators because they couldn’t make ends meet,” said Jordyn Rossignol, owner of Miss Jordyn’s Childcare and Preschool in Caribou who described losing a teacher with a degree in early childhood development to a local hardware store who could pay her more. “We’re not losing educators to other educational programs. We’re losing them to other jobs. In Aroostook County, that’s really hard on us.”

“If Maine can make childcare a desirable field where educators see themselves valued and they have this financial support to count on, we can begin to expand access to child care. This bill starts to do that,” said Heather Marden, Maine Association for the Education of Young Children.

“When I was 6 months pregnant, I was desperate to find a childcare provider for my future child. I planned my pregnancy and began adding my name to child care waitlists before conception. I was on over 20 different waitlists in the Greater Portland area. My spot on the waiting list ranged from 145 to 28,” said expectant mother, Angelina Klouthis, who testified in support of the bill. “Childcare providers are experiencing some of the lowest wages in the state and they do some of the most important work in our children’s lives. COVID pushed many moms out of the workforce. This bill addresses both recruiting and retaining essential workers. Childcare providers are the backbone of our economy– I can’t work, unless I have childcare options. This bill will clearly help facilitate that for working moms like myself.”

Members of the public can view today’s work session on the Legislature’s IDEA Committee Youtube Channel. The full Legislature will vote on this bill in the coming weeks. 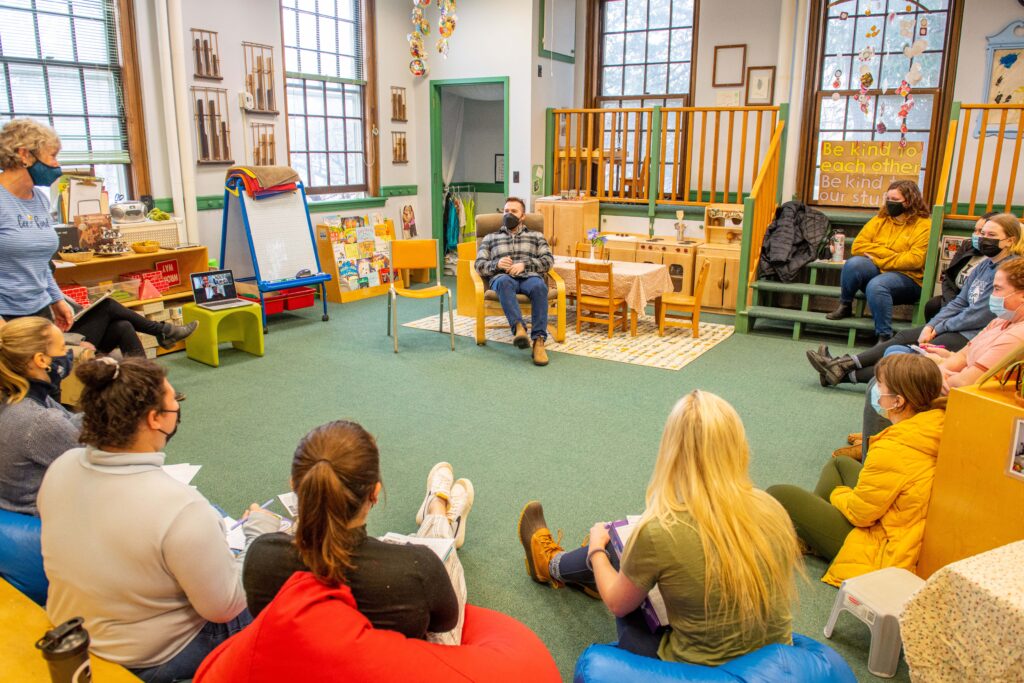