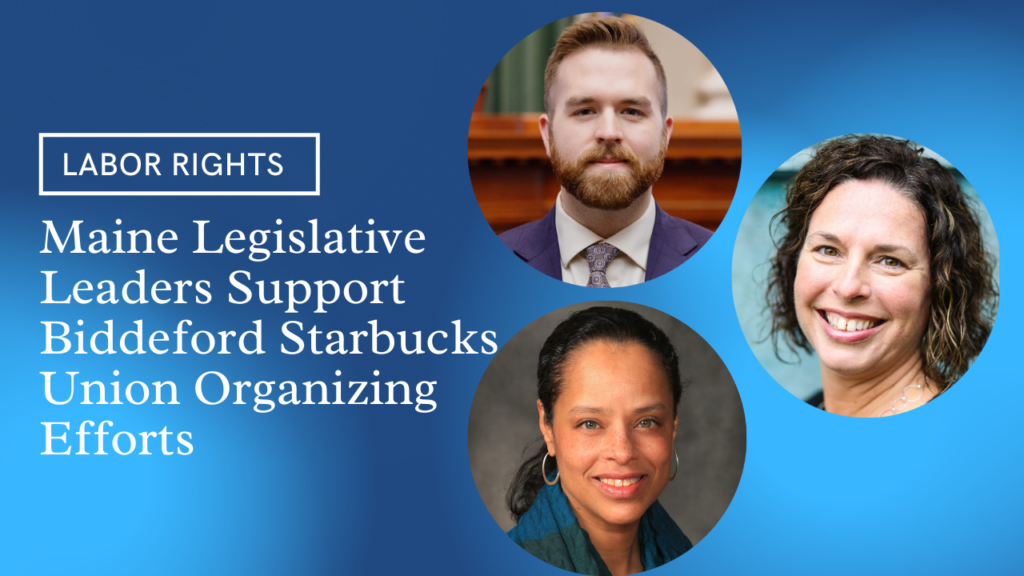 AUGUSTA — On Thursday, Maine Legislative leaders sent a letter in support of Biddeford Starbucks workers to the President and CEO of Starbucks, Howard Schultz.
The letter states:

“It has come to our attention that employees at Store #48490 in Biddeford, Maine are in the process of organizing a union with Starbucks Workers United. As state elected officials, we support our hardworking constituents and respect their right to form labor associations to represent their interests in the workplace.
“By exercising this right, they plan to use their collective voice to improve staff recruitment and retention, working conditions, management-employee communication and the company as a whole. These Starbucks partners have expressed a love for the store and their community, which is why they are in such a good position to help you build a better work environment and address staff shortages.

“We urge you to recognize that your partners at Store #48490 have the legal right to organize without retaliation or intimidation. The decision to organize is a fundamental right and should be up to the workers to make that decision free from interference.” The full letter is available here.

In May, Biddeford’s organizing workers also sent outreach to Schultz after they filed a petition for a union election. The announcement from Biddeford made Maine the 35th state where Starbucks workers are unionizing.

“I stand with Biddeford’s Starbucks employees here in my hometown! They are using their collective voice to advocate for themselves in an effort to strengthen their workplace. I stand with their movement and support them as they demand respect and transparency from Starbucks’ leadership,” said Speaker Ryan Fecteau of Biddeford. “I am extremely proud of Biddeford’s workers right now. They are setting an example that so many Mainers are inspired by.”

In his career outside the Maine Legislature, Fecteau is a union member of CWA Local 2336.

Maine unions saw their ranks swell to 82,000 members in 2020 from 69,000 in 2019. From the Great Resignation and ‘Striketober‘, the last year has been deemed the year of the worker. It was marked by public demands for safe working conditions and fair pay, unionization efforts, and worker mobilization.

In 2022, legislation from Speaker Fecteau, LD 1816, An Act to establish a new Labor and Community Education Center at the University of Southern Maine was passed. It will establish a new labor center at USM and will enable the Bureau of Labor Education at the University of Maine in Orono to expand its valuable work in labor studies. The labor center will offer labor education for students, unions and the community at large. It will serve as a hub for organizing, regular trainings and workshops, conferences, speakers and films that address issues of concern to Maine’s working people such as labor law and history, discrimination and worker’s rights.
Scroll to Top
Scroll to Top